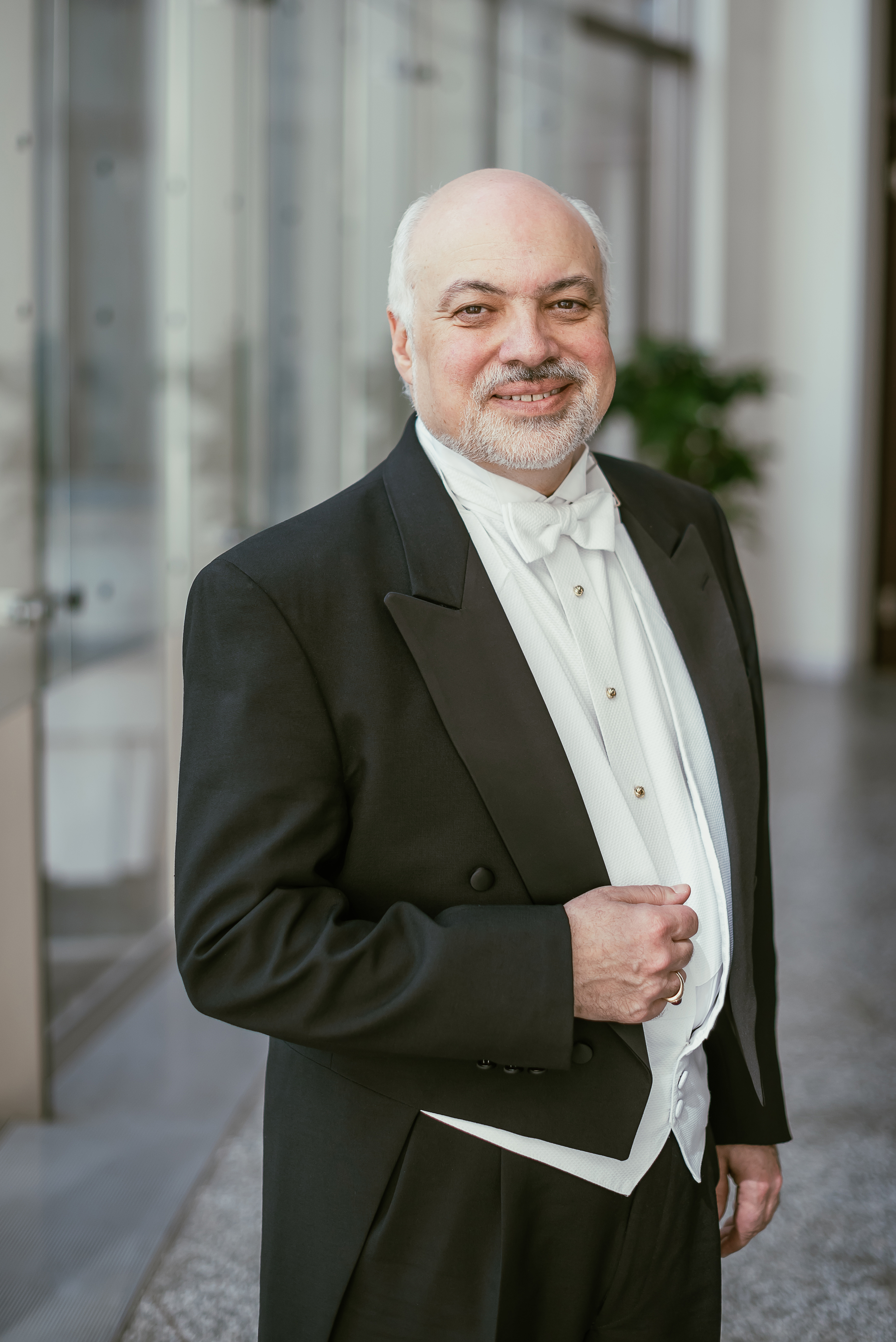 Four time Grammy-nominated conductor Constantine Orbelian “stands astride two great societies, and finds and promotes synergistic harmony from the best of each.” (Fanfare)

For over 30 years, the brilliant American pianist and conductor has been a central figure in Russia’s and Eastern Europe’s musical life – first as Music Director of the Moscow Chamber Orchestra and the Philharmonia of Russia. He is the founder of the annual Palaces of St. Petersburg International Music Festival and is the Chief Conductor of the Kaunas City Symphony Orchestra in Lithuania. In 2016 he also became General and Artistic Director of the State Academic Opera and Ballet Theater in Yerevan, Armenia. During his four-year tenure in Armenia, Orbelian created new productions of Bizet’s Carmen, Mozart’s The Magic Flute, Massenet’s Manon (in partnership with the Moscow Stanislavsky Theater), and Karen Khachaturian’s ballet Cipollino (in partnership with the Bolshoi Theater in Moscow). He restored a historic production of Donizetti’s opera Poliuto, produced the ballet La Bohème to the music of Charles Aznavour and brought Renée Fleming for the first time to Armenia for a recital. In 2018, Orbelian brought the Armenian Ballet company to the famed stage of the Bolshoi Theater in Moscow for gala performances of Aram Khachaturian’s ballet Gayane. Performances at Dubai Opera and the grand opening of the new Opera House in Kuwait were high points of the 2018 season. In all of these and other music centers, Orbelian leads concerts and recordings with some of the world’s greatest singers.

Opera News calls Constantine Orbelian “the singer’s dream collaborator,” and commented that he conducts vocal repertoire “with the sensitivity of a lieder pianist.” The California-based conductor tours and records with American stars such as Renée Fleming, Sondra Radvanovsky, Lawrence Brownlee and Stephen Costello, and made numerous celebrated recordings for Delos with Dmitri Hvorostovsky before the legendary singer’s untimely death. Appearances in the USA have included numerous performances at the Great Performers series at Lincoln Center, Stern Auditorium at Carnegie Hall and the Mostly Mozart Festival, as well as performances at the great musical centers in the United States, Canada, and Central and South America.

“Orbelian has star quality, and his orchestra plays with passion and precision,” The Audio Critic wrote of his acclaimed series of over 60 recordings on the Delos label. Among his concert and televised appearances are collaborations with stars Renée Fleming and Dmitri Hvorostovsky, and with Van Cliburn in Cliburn’s sentimental return to Moscow – the great pianist’s last performance. Orbelian’s frequent collaborations with Hvorostovsky included repertoire from their Delos recordings of universal sentimental songs, Where Are You, My Brothers?

and Moscow Nights, as well as their 2015 recording in the same series, Wait for Me. His recordings with Hvorostovsky of Verdi’s Simon Boccanegra and Rigoletto have become legendary. Rigoletto was nominated for a Grammy Award in the Best Opera recording category. Orbelian has conducted historic live telecasts from Moscow’s Red Square, with such artists as Hvorostovsky and Anna Netrebko, viewed live around the world by 198 million people and subsequently issued on Deutsche Grammophon. Orbelian has also released recordings on Philips, Warner Classics and Finlandia. An award-winning DVD released on the Decca label – Renee Fleming and Dmitri Hvorostovsky, a Musical Odyssey in St. Petersburg – was broadcast on the Great Performances series on PBS.

Born in San Francisco to Russian and Armenian emigré parents, Constantine Orbelian made his debut as a piano prodigy with the San Francisco Symphony at the age of 11. After graduating from The Juilliard School, he embarked on a career as a piano virtuoso that included appearances with major symphony orchestras throughout the United States, United Kingdom, Europe and Russia. His recording of the Khachaturian Piano Concerto on the Chandos label, with conductor Neeme Järvi, won the “Best Concerto Recording of the Year” award in the UK.

Orbelian’s appointment in 1991 as Music Director of the Moscow Chamber Orchestra was a breakthrough event: he is the first American ever to become music director of an ensemble in Russia. In 2001, Orbelian was the subject of a CBS Sunday morning episode “To Russia with Love.”

A tireless champion of Russian-American cultural exchange and international ambassadorship through his worldwide tours, he was awarded the coveted title “Honored Artist of Russia” in 2004, a title never before bestowed on a non-Russian citizen. In May 2010, Orbelian led the opening Ceremonial Concert for the Cultural Olympics in Sochi, setting the stage for Russia’s hosting of the Olympic Games in 2014. In 2012 the Consulate in San Francisco awarded him the Russian Order of Friendship Medal, whose illustrious ranks include pianist Van Cliburn and conductor Riccardo Muti, and which singles out non-Russians whose work contributes to the betterment of international relations with the Russian Federation and its people.

From his 1995 performance at the 50th Anniversary celebrations of the United Nations in San Francisco, to his 2004 performance at the U.S. State Department commemorating 70 years of diplomatic relations between Washington and Moscow, and a repeat State Department appearance in 2007, all with the Moscow Chamber Orchestra, Orbelian continues to use his artistic eminence in the cause of international goodwill. He and his orchestras have also participated in cultural enrichment programs for  young people, both in Russia and the United States. In 2001 Orbelian was awarded the Ellis Island Medal of Honor, an award given to immigrants, or children of immigrants, who have made outstanding contributions to the United States.