The 25 Best Classical Music Recordings of 2017 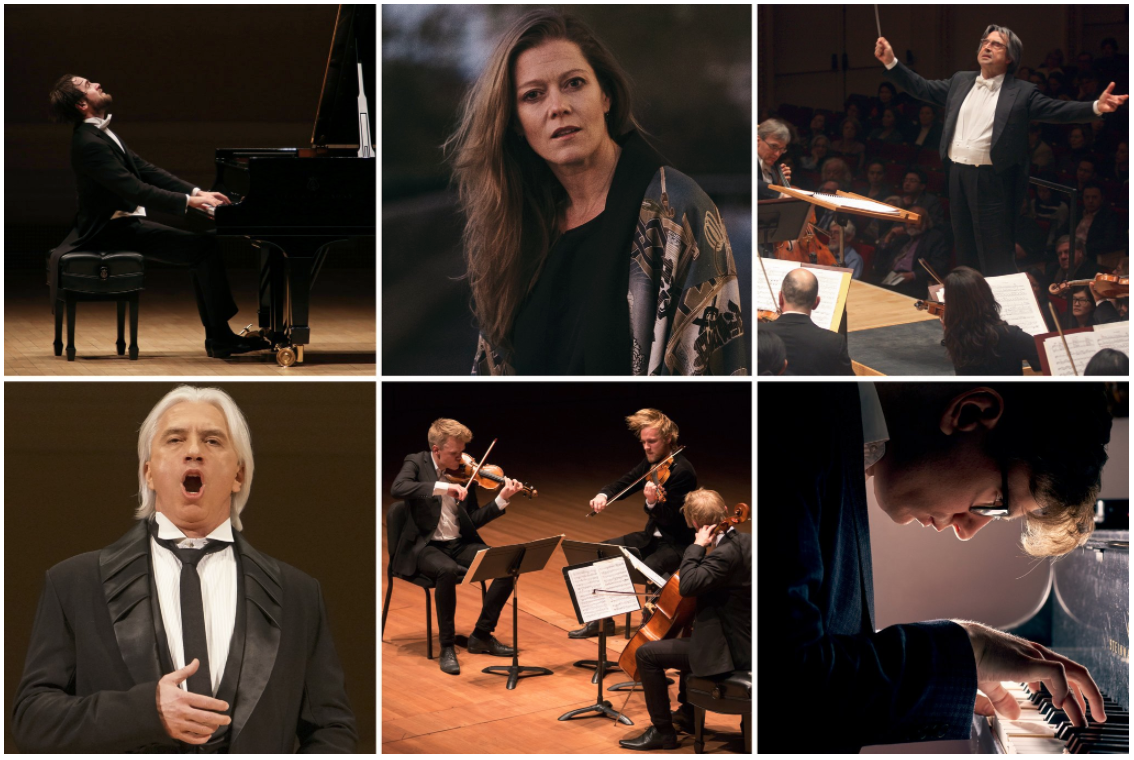 Music writers spend their days guiltily staring down literally dozens of unheard new recordings that pile up as the year goes on, with more coming in each day. So it has been an arduous and frustrating but also inspiring and illuminating exercise to narrow our favorites down to five each, for a list of 25 gorgeous releases that covers a huge amount of chronological and stylistic ground.

‘THE JOHN ADAMS EDITION’ Berlin Philharmonic (Berliner Philharmoniker Recordings). This isn’t one recording so much as a hefty collection of them from the 2016-17 season, when Mr. Adams was this orchestra’s composer in residence (and occasional conductor). Some classic works are represented alongside more recent ones, led by Alan Gilbert, Gustavo Dudamel, Simon Rattle and Kirill Petrenko. JOSHUA BARONE

BACH: ‘Goldberg’ Variations Beatrice Rana, piano (Warner Classics). In the United States, at least, Ms. Rana has not yet acquired the reputation of some other young pianists. She should, and she will, for what she displays here is playing of preternatural sensitivity, sophistication and control, along with a touch of magic, as Bach’s theme returns at the end. DAVID ALLEN

BEACH, CHAMINADE, HOWELL: Piano Concertos Danny Driver, piano; BBC Scottish Symphony Orchestra; Rebecca Miller, conductor (Hyperion). Major orchestras ignored the 150th birthday this year of Amy Beach (1867-1944), but Hyperion did not in this fine release, recorded with tangible commitment by all concerned. Nor should the works by Dorothy Howell and Cécile Chaminade be overlooked. D.A.

BERLIOZ: ‘Les Troyens’ Orchestre Philharmonique de Strasbourg; John Nelson, conductor (Erato). Berlioz’s epic opera has rarely been given such luxury treatment as in this magnificent live recording from France. Mr. Nelson, a “Troyens” veteran many times over, expertly handles the unwieldy score with help from starry singers like Joyce DiDonato, in her role debut as Didon, and Michael Spyres as Enée. J.B.

‘BLOODROOT’ Kelly Moran, keyboards (Telegraph Harp). When writing for “prepared” piano, some composer-performers focus on timbral effects to the exclusion of all else. Throughout this rewarding set of miniatures, Ms. Moran avoids this pitfall. The avant-garde touches she employs may be inspired by John Cage, but her melodies are memorable, and original. SETH COLTER WALLS

BRUCKNER: Symphony No. 9 Chicago Symphony Orchestra; Riccardo Muti, conductor (CSO Resound). Happily, Mr. Muti seems to have had a Bruckner epiphany in Chicago. The orchestra responds to him with an unforced power that works beautifully with this composer. We have to hope that the Bruckner symphonies he has performed since, and others, will soon follow on record. J.R.O.

‘CHOPIN EVOCATIONS’ Daniil Trifonov, piano; Mahler Chamber Orchestra (Deutsche Grammophon). Do we need another recording of Chopin’s piano concertos? Well, we need this one, because Mr. Trifonov plays them magnificently; because of illuminating chamber-orchestra arrangements by Mikhail Pletnev, who conducts; and because of Chopin-inspired works by Grieg, Barber and others that join. ANTHONY TOMMASINI

‘CRAZY GIRL CRAZY’ Barbara Hannigan, soprano and conductor; Ludwig Orchestra (Alpha Classics). Ms. Hannigan can do so many things so well, and she does most of them here. She conducts and sings music from Berg’s “Lulu” and Gershwin’s “Girl Crazy” with predictable aplomb, but for me it is the sensuous and utterly uninhibited rendition of Berio’s solo “Sequenza III” that seals the deal. J.R.O.

‘DISCUSSIONS’ (Wide Hive) Roscoe Mitchell has long been interested in teaching orchestras how to improvise, and this album reveals the fruits of his labor. A chamber orchestra digs into new arrangements of his past free-improvisation saxophone solos; the sense of fresh community they create around “I’ll See You Out There” is a testament to Mr. Mitchell’s underlying vision. S.C.W.

PHILIP GLASS: Piano Works Vikingur Olafsson (Deutsche Grammophon). Mr. Glass’s piano études have been criticized as unmusical, or even boring. But Mr. Olafsson’s recording of 10, rich with interpretive depth and surprising turns, is nothing short of eye-opening. J.B.

HARTKE: ‘The Ascent of the Equestrian in a Balloon’ Boston Modern Orchestra Project; Gil Rose, conductor (BMOP/sound). This exciting recording of four works by Stephen Hartke, written over some 30 years, confirms that he is one of the most distinctive and important living composers. If the title of “The Ascent” doesn’t grab you, the breathless, fractured, skittish music will. A.T.

‘HOMMAGE À BOULEZ’ West-Eastern Divan Orchestra; Daniel Barenboim and Pierre Boulez, conductors (Deutsche Grammophon). Boulez, who died in 2016, gets quite the tribute here with more than two hours of music, including “Le Marteau Sans Maître.” That score might frighten some young musicians; here, the contralto Hilary Summers and members of the West-Eastern Divan Orchestra are fearless. J.B.

‘LAST LEAF’ Danish String Quartet (ECM New Series). It is wonderful to hear these superb players let their collective hair down in this collection of (mostly) Scandinavian folk tunes and original material composed in like fashion. This should warm the heart of every fan of fiddling, whether bluegrass, Celtic or Bachian. J.R.O.

‘LUTHER COLLAGE’ Calmus Ensemble (Carus-Verlag). Collage indeed. This excellent German vocal quintet presents seven of Martin Luther’s chorales in many versions, typically changing composers from one verse to the next. Those composers include some from Luther’s time and some from our time, and instrumental chorale preludes appear in Swingle Singers-like vocalise, without the insistent perkiness. J.R.O.

MAHLER: Symphony No. 3 Gerhild Romberger, alto; Cantemus Children’s Choir; Bavarian Radio Chorus; Budapest Festival Orchestra; Ivan Fisher, conductor (Channel Classics). Every moment of this recording is fresh and insightful, traits we have now come to expect from Mr. Fisher. But it is the finale, Mahler’s ode to love, that pulls at the memory — a miracle of phrasing; a quiet wonder of string tone and balance; a paean to a devotion tender, fragile and deep. D.A.

‘RIGHT UP ON’ Oliver Lake, alto saxophone; FLUX Quartet (Passin’ Thru). Mr. Lake has never paid genre distinctions much heed. This collaboration with the FLUX Quartet is a crucial document of his thinking. “5 Sisters” traffics in modernist blues; pointillism and sweet harmonies alternate in “2016.” When Mr. Lake joins the quartet, his saxophone playing sparks new heights of intensity. S.C.W.

SCHUBERT: ‘Die Schöne Müllerin’ Christian Gerhaher, baritone; Gerold Huber, piano (Sony Classical) It’s Mr. Gerhaher at the peak of his abilities, with his marvelous accomplice Mr. Huber, singing Schubert. Need one say more? Probably not, except that their decision to weave in the Wilhelm Müller poems that Schubert did not set is a masterstroke, especially when read with such musical sense by Mr. Gerhaher. D.A.

TCHAIKOVSKY: Symphony No. 6 MusicAeterna; Teodor Currentzis, conductor (Sony Classical). Some listeners might find the approach here overblown. I do not. There is more cultivated Tchaikovsky out there, to be sure, and more precise, too, but none more faithful to his devastating purpose. The climaxes of the first movement feature some of the scariest conducting I have ever heard, the dark night of a soul pushed over the brink. D.A.

‘THOUSANDS OF MILES’ Kate Lindsey, mezzo-soprano; Baptiste Trotignon, piano (Alpha Classics). Ms. Lindsey shows just how nimble her voice can be with this diverse collection of 20th-century songs by Alma Mahler, Weill, Korngold and Zemlinsky, who all fled the Nazis. Especially worth hearing is Zemlinsky’s music, which is tragically underrepresented in concert halls today. J.B.

‘TORRENT’ Alex Mincek, composer (Sound American). “Pendulum VII” is a thrill ride. At a second-by-second level, it might seem as if the sonic riot is too much to process. But zoom out, and this hailstorm’s qualities of shape and proportion begin to emerge. The slower compositions on this bracing album of Mr. Mincek’s music are just as fine. S.C.W.

‘UNBOUND’ Jasper String Quartet (Sono Luminus/New Amsterdam). This quartet’s taste in repertoire runs toward post-Minimalist composers who work with melody — and an edge. The pop-style rhythmic fury of Judd Greenstein’s “Four on the Floor” is exhilarating. Annie Gosfield’s “The Blue Horse Walks on the Horizon” shows some of the same dramatic flair as her recent opera for the Los Angeles Philharmonic. S.C.W.

VERDI: ‘Rigoletto’ Kaunas City Symphony Orchestra; Constantine Orbelian, conductor (Delos). Last year, while battling brain cancer, the baritone Dmitri Hvorostovsky spent nine days recording “Rigoletto,” which was released this November, shortly before his death at 55. He gives a russet-toned, compelling performance, joined by an impressive cast for a gripping and, in every sense, poignant performance. A.T.