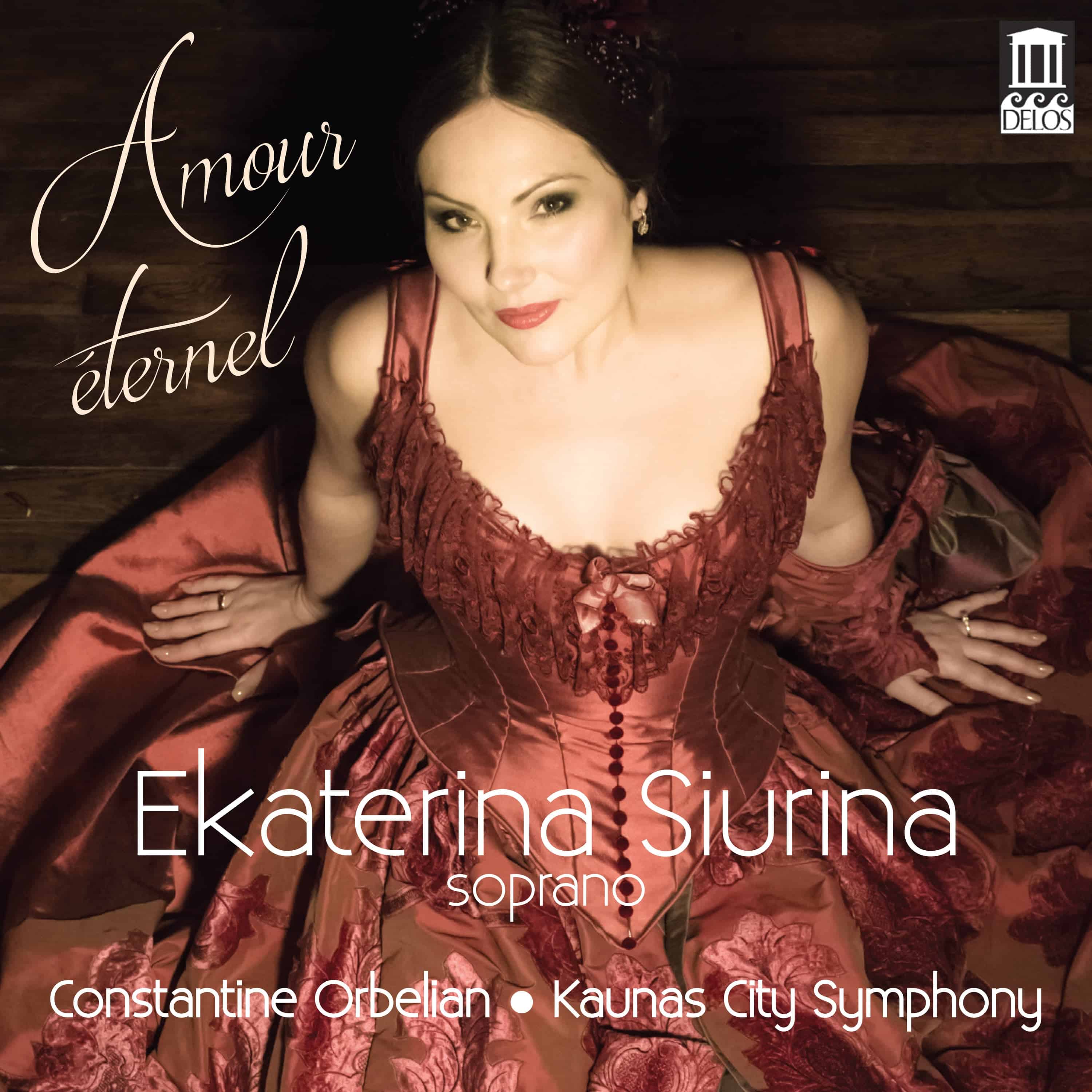 Russian soprano Ekaterina Siurina’s impressive debut album on Delos is named Amour éternel (Eternal love). She has chosen a collection of Italian and French arias that incline towards her customary lyric soprano repertory. In the Roméo et Juliette and La bohème duets, she is joined by her husband, tenor Charles Castronovo born in New York City.

As a student at the Russian Academy of Theatrical Arts, Moscow, Siurina made her professional role debut before graduation. In 1999 at Novaya Opera, Moscow, she sang Gilda in Rigoletto with late renowned baritone Dmitri Hvorostovsky in the title role. Siurina’s progress has been conspicuous. She appeared at most of the world’s greatest opera houses and festivals. The list includes Teatro alla Scala, Milan; Bayerische Staatsoper, Munich; Staatsoper Berlin; Grand Teatre del Liceu, Barcelona; Royal Opera House, London; Paris Opera Garnier; New York Metropolitan; Salzburg Festival; and Glyndebourne Festival. In 2018 at Munich, I was hugely impressed with Siurina’s Adina in the Bayerische Staatsoper production of L’elisir d’amore directed by David Bösch.

On this disc, Amour éternel, Siurina’s programme comprises seven arias by four French composers, and seven arias by two Italian composers. There are no real surprises with selections. They are virtually all standard repertoire, much admired arias by the most eminent composers. The single exception is less known Gustave Charpentier but the aria Depuis le jour from his opera Louise is popular, and is sometimes encountered on recital programmes. A recital album of this type benefits, I believe, from the additional interest of including two or three rare arias, so this seems like a missed opportunity.

From start to finish in this studio recital, Siurina impresses with an accomplished performance, by turns assertive, vulnerable, passionate, sensitive, and tormented. A lyric soprano, she has selected a programme of arias that agreeably suits her voice. There is the lighter lyric role of Juliette (Roméo et Juliette), the full-lyric roles that include Liù (Turandot), Mimì (La bohème) and Micaëla (Carmen), the coloratura demands of Marguérite (Faust) and again Juliette. She has to push her voice for the lirico-spinto role of Desdemona (Otello).

In a most convincing performance, Siurina demonstrates her smooth, attractive tone and satisfying levels of vocal strength and dramatic ability to elicit an emotional response from the listener. There are real advantages: the ability to move easily through her mellow mid-range, and the quality of her thrilling high register combined with first-rate coloratura. Occasionally there is some patchiness, and her notable vibrato when under pressure can be slightly uneven, yet they hardly intrude at all. Siurina, compared to my ideal soprano voice, does not have the level of tone colour but I realise that few are blessed with the gift of, say, Gheorghiu and Netrebko. Standing out is Juliette’s coloratura showpiece Je veux vivre (Juliet’s Waltz) from Romeo et Juliette. Siurina is suitably girlish, ensuring a breathless state of euphoria after finding love. Maybe her low register is not her strongest suit but her aptitude for coloratura display is never in doubt.

Another highlight is the aria O Dieu! que de bijoux! from Faust. It is known as the Jewel Song: maiden Marguerite wears the jewels she has found. Siurina convinces at communicating Marguerite’s girlish glee when she looks at herself in the mirror and sings of how the jewels enhance her beauty. Siurina admirably acknowledges the character’s underlying vulnerability. The Jewel Song provides a test of her high notes and coloratura demands – both are decisively achieved. Micaëla’s romance Je dis que rien ne m’épouvante from Carmen is also striking, with its fine horn accompaniment. Village girl Micaëla is seeking to rescue José from Carmen’s clutches and win back his affections. Siurina captures the mood as the innocent and love-struck Micaëla who beseeches God for protection and courage. The singer completes rapid leaps to her impressive top register.

I admire the sublime duet O soave fanciulla from La boheme between consumptive seamstress Mimì and poet Rodolfo. The couple experience the feeling of being in love for the first time. Clearly inspiring each other, Siurina and tenor Charles Castronovo provide a convincingly passionate performance that generates a most dramatic ending to the scene. In a fine performance of Desdemona’s O Salce! Salce! (Willow Song) from Otello, it is mezzo-soprano Rita Preikšaitė who successfully takes the role of Desdemona’s companion Emilia. Constantine Orbelian adopts sensible speeds. The Kaunas City Symphony Orchestra plays capably with unity, and never swamps the soloists.

As is its custom, Delos has provided helpful booklet notes, and the French and Italian texts with English translations. There is also a valuable explanation of each aria within its operatic context and biographies of the performers. There is no essay. The sound is clear and nicely balanced between singers and orchestra. Ekaterina Siurina excels with Amour éternel, a most rewarding album of Italian and French arias, and duets with Charles Castronovo.